The term “spatial thinking” is used as an umbrella term covering various concepts such as spatial perception, spatial ability, visual perception, or spatial intelligence. An analysis of the descriptions and definitions of these terms shows that they are often described and used differently by people from different scientific fields (Hegarty, 2010; Maier, 1994). The sub-terms are not understood to be synonyms for the general term “spatial thinking,” but refer to specific spatial sub-skills that are described and used differently in various contexts in the literature. The term “spatial thinking” is used as a unifying, common umbrella term for the human ability to direct optical stimuli received by the eye into the brain, to be able to interpret these stimuli, to be able to recognize spatial objects, to be able to mentally imagine spatial objects (with or without prior optical stimuli), to be able to manipulate these objects mentally, to be able to imagine taking other perspectives in space, to be able to perceive and interpret motion sequences, and to be able to execute spatial motor movements.

The umbrella term “spatial thinking” includes the following abilities: Basically, visual-anatomical senses are needed to be able to receive optical stimuli. The facets of visual perception help to filter and interpret the optical stimuli, supported by further sensory impressions such as hearing or kinesthetics, and thus to analyze them fundamentally. With the help of the fascinating possibility of purely mental operating with spatial objects, these objects can now be manipulated (purely mentally), or we can take other spatial perspectives purely mentally, and can thus use our spatial ability. If necessary, we also plan (fine)motor movements, execute them, see the results of the execution, and thus get into a loop-like sequence of spatial thinking (right arrows in the figure). In contrast, in creative processes (such as designing a house) we do not need any optical stimuli to think spatial (see left arrow in the figure). Here, we use our spatial ability to mentally design new things or to develop solutions to spatial-geometric problems.

The umbrella term “spatial thinking” includes the abilities in the following list:

In the literature, numerous different terms are used regarding spatial thinking. Each of these terms describes a certain facet (specific ability, concrete phenomenon, etc.). Often it can be noted that these terms are used casually, carelessly, and imprecisely. The following explanations of some of the frequently used terms related to spatial thinking are intended to highlight the specifics of each term and describes how the terms should be understood in the context of this paper.

Spatial ability is the ability of an individual to mentally imagine spatial objects, to manipulate them mentally (move, scale, rotate, mirror, …), to recognize relations between several spatial objects and to move to different positions in space solely in the imagination (i.e. to imagine space from different perspectives, also known as perspective taking). The description fits with Sorby’s definition “The ability to visualize objects and situations in one’s mind and to manipulate those images“ (Sorby, Drummer, Hungwe, & Charlesworth, 2005) and Lohman’s definition of spatial ability “Spatial ability may be defined as the ability to generate, retain, retrieve, and transform well-structured visual images” (Lohman, 1993), and to the definition of visuo-spatial ability of many other researchers. Spatial ability is therefore a cognitive human ability and does not include any real activities (such as real viewing of spatial objects or performing (fine)motor movements). The term spatial ability is often used broadly. The clarification in this article should help to classify this term precisely. The term spatial ability is often used in the context of the factor analytic models of spatial thinking research. Sometimes, however, the term is seen somewhat diluted and is extended by facets of (anatomical) vision, visual perception or even motor movements. Here it should be clarified that spatial ability is a purely cognitive “mind game” (see figure 5).

Spatial cognition is defined as the ability to determine spatial relationships in relation to one’s body. The vertical and horizontal have a special position in this context. Linn and Petersen (1985) write: “… subjects are required to determine spatial relationships with respect to the orientation of their own bodies …”). Guilford (1964) states, “A third factor “Space III” … seems to suggest a capacity for orientation in the direction of gravity (the vertical).” and further, that “… the Space III factor seems to depend on the effect of gravity on the organism and the learned ability to interpret it correctly.” and can be interpreted as a “kinesthetic system factor.” Spatial perception is therefore to be seen as the anatomical-kinesthetic ability of an individual to be able to recognize specifically the vertical in relation to the position of his or her own body. It therefore represents the ability of an individual to be able to recognize the position of her/his own body in relation to the environment.

The brain has numerous processes to be able to create a spatial, three-dimensional image from the two-dimensional image of our environment on the retina (a layer of nerve tissue that covers the inside of the eyes). This ability, called spatial perception, arises from the interaction of a multitude of different interpretations of visual perception, such as monocular/binocular vision, color interpretations, familiar size, overlaps, shadows, texture density, transverse disparity, muscle movements of the lens, motion parallax, and also includes the stimuli and impressions of other sensory sources (e.g., kinesthetics, hearing).

The term “spatial thinking” is used as a unifying, common umbrella term for the human ability to direct optical stimuli received by the eye into the brain, to interpret these stimuli and thus to recognize spatial objects, to mentally imagine spatial objects, to mentally manipulate these objects, to imagine different positions in space, to take different spatial perspectives, to perceive and interpret motion sequences, and to execute (fine)motor spatial movements. Spatial thinking is often based on optical sensory impressions and includes the anatomical and basal cognitive ability for visual perception, the purely mental ability to think spatially and finally the corresponding spatial motor processes.

Visual perception is a preliminary stage (to the purely cognitive-mental operation with spatial objects) of the anatomical reception and basal-cognitive processing of optical stimuli. The optical stimuli received via the eye are filtered by the brain and its upstream areas and relevant information is extracted and interpreted. These anatomical and basal cognitive steps finally enable the brain to “recognize” spatial objects by matching them with memories or to “learn” spatial objects that are still unknown.

More detailed information on spatial thinking can be found at the article of Maresch and Sorby (2021) at https://www.heldermann.de/JGG/JGG25/JGG252/jgg25023.htm. 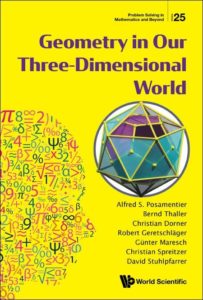